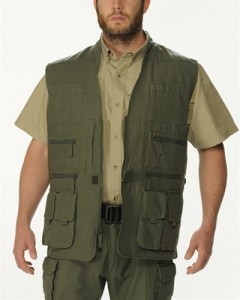 That is the question an Operator may ask themselves while out in the field.   There are a lot of so called tactical vests on the market, and there are also several military surplus assault vests, too.  Sometimes some of these are good for something, but not always in the best condition or won’t go very well with your present line of tactical clothing.   GMG Global Military Gear makes a nice tactical vest that has the ability to retain a sidearm on the front pocket as well as hold several pistol magazines and carbine magazines.
Another extremely popular tactical vest design is one made out of a cotton canvas  design.  You may have seen something similar from 5.11, SigTac or Woolrich Elite.   The tactical apparel clothing company called Eotac has the Style 101 Tactical Vest.  The hook and loop carbine magazine designs are for magazines  with magpuls which gives it the edge over it’s competitors.  If you want to be creative with the use of the pockets, you’ll have plenty of versatility.  The pockets can be used for retaining flashlights, knives, cell phones, spare pistol magazines ect.  Their are also napolean pockets that can hold a small frame revolver or semi-auto.