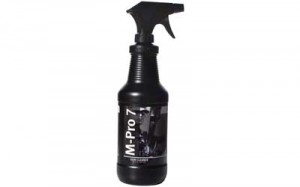 We all know that most of the Military has been using a CLP for cleaning, but now that we’re actually in full fledged combat in parts of the world, certain things are becoming out dated.   I’ve noticed for years that Breakfree CLP is a very good gun cleaner and protector, but it always seems to disappear from your gun even if you don’t shoot it.   I’ve put enough guns in gun safes for long periods of time to notice which guns hold lube, and if you are a Sig Sauer fan you should know that those guns need lubrication to keep up with the modern world.   I have picked up some of the Mpro7 products to test them out due to friends telling me about it and here’s some feedback.

I am not one to like wearing gloves but if you are around all of this stink, it’s something to be concerned about.   Gun cleaning supplies like CLP are smelly and in the winter you may have issues with ventilation.     MPro-7 cleaner does an outstanding job of stripping gun oils and carbon off of your gun and this is a must for anyone running a direct impingement firearm.   The Pro-7 gun oil also seems to  hold on to firearms better and I could feel the difference on my Sig handguns as soon as I racked the slide.   I’ll have to shoot them for awhile to tell if they hold up better than when I used CLP, but I have had guns jam on me after 400rds or so when I only used CLP and let them sit for a few months.