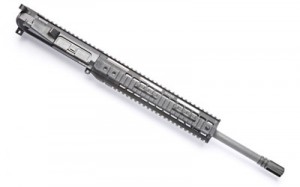 I guess the less expensive stuff is what most people seem to go for and right now that is everything from Spikes Tactical.  The funny thing is these guns are so well made for the price that they were in high demand even before things heated up in the Country.  The AR15 is the primary firearm in the United States and transitioning from Civilian to Military with it is an easy step.  Many people forget that the original intent of having an armed population is so that the population could be called to arms at any moment to defend their Country.

Now that so many people own the AR15 changing the guns to something longer or shorter or to MOE can be as easy as pushing 2 pins out.  There are definitely some big differences in the durability of the firearms, but the lower end of the spectrum for AR15 upper receivers is pretty darn good.   Mismatched parts and bad assemble isn’t something I heard about too often anymore.   The poorly run companies seem to have been cleaned out and there are some really good guns being made.  We’ve sold lots of gas piston AR15s this year and the pool is getting competive.