Most of you kn 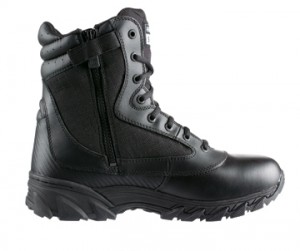 ow that I have bad feed and I am not always the best source for giving good opinions about various tactical gear because I just can’t always use it in the manor that it is meant to be.    I have been wearing the 1232 boots for about 4 years and noticed some production chances that have really cut back from the small number of complaints about the boots to ZERO.   The Original Swat boots have a stitched toe that was previously just glued on and this gives it more durability for kicking into objects.   In this industry you aren’t just running and sometimes have to kick in a door or kick a bad guy down on the ground.   I’ve seen people break zippers on some of the Original Swat boots and I heard there is a production change to the new 2013 production but those complaints were few.

The YKK zippers and the designs have gotten even better and Original Swat pays far more attention to backing their products than most customers.   I am now wearing the Chase Series Original Swat boots and the traction on these is far superior to the  that I was wearing before.   When you are choosing a Police Boot  you do have to think about traction because there are many different pros and cons of each style.   Some people want safety toe and others don’t and if you want Waterproof boots you probable aren’t going to be wearing them in the hot summer.  Lace up or side zip are also things you need to decide on.   The 1151 coyote boot is a very eye catching product we like to keep out on display because it’s the least tactical looking color but still has applications to people working in the Industry.