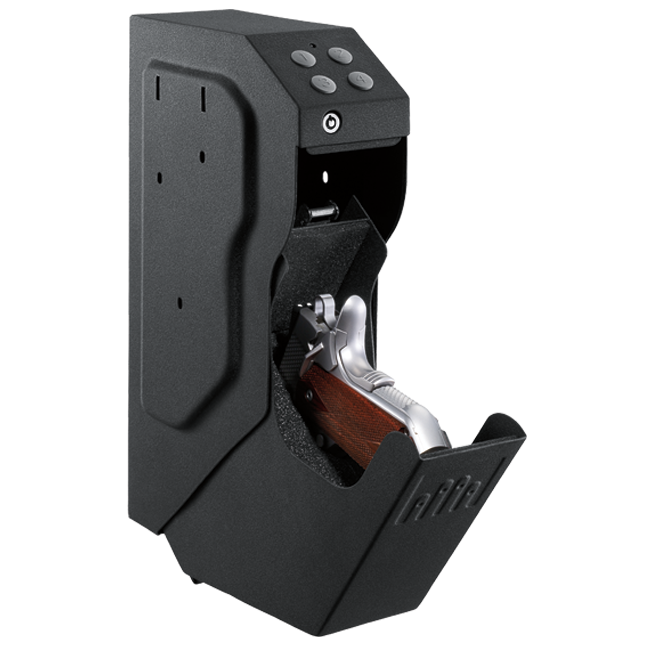 We recently had new customers ask us what we thought about keeping firearms in the bedroom loaded, and in the night stand.   I’ve heard of several firearms instructors warn people of sleep walkers, and stress, and bedside firearms not being a good mix.   I’m not a fan of biometric safes because dead bodies can be dragged over to a safe and opened.   Didn’t think of that?  Yeah, that’s how criminals work, your fingerprints still work when you’re lungs aren’t breathing.  If criminals don’t acquire firearms via straw-purchases, they get them from breaking into homes and stealing the guns.   Gun safes don’t “stop” criminals from stealing firearms, but they dramatically slow them down, sometimes by hours.   The most common break ins are daytime smash and grabs to the master bedroom.  If you have a bedside gun or a shotgun in the closest and not in a Gunvault Gun Safe, you can bet that, the bad guys will view that as a prize.

There is a new gun safe from Gunvault that is meant for storing Carbines or short barrel shotguns in.  It’s not too heavy that you have to worry about it ruining a second story floor.   I highly suggest push button combination Gunvault Gunsafes and not keylock or combination locks, unless it’s for a car safe.   I recently took Act 235 certification and we were warned that in Phildelphia, if you leave your firearm in a car and it gets stolen, that you can lose your CCW or Act 235,  get a car safe, keep it in a place where you can see it, and make sure you lock your firearm up when nobody sees you doing it.  The Drawervault and the Speedvault are also things to consider.