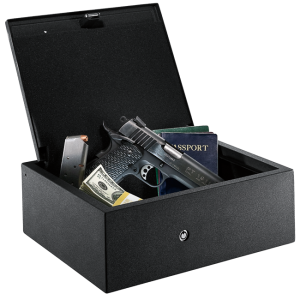 There are plenty of stories in the news right now of Law Enforcement gun accidents and a Child discovering a handgun and shooting themselves.   Handguns are inherently more dangerous than rifles because it’s much easier to be cumbersome with them.   Just look at the number of accidents with holstering and un-holstering of firearms.    The Blackhawk Serpa has  reputation of not being suitable for many people because it is possible to release the firearm with index finger, and depending on how you draw the gun up, your finger, while depressing the release button can curl into the trigger guard and hit the trigger while drawing the gun.   If the proper training is taking, it’s less likely to happen but if people just did more training all of this would dramatically be reduced, but they don’t and you have to expect that many people just won’t.

In firearm instructor training we learned that I am responsible for ever bullet I send, and there is a lawyer attached to everyone of them.   If you read the stats on firearm accidents it’s mostly handguns, then alcohol related hunting accidents or hunters not identify people from animals.   That’s one reason I don’t go out for Deer rifle season unless it’s private land,  Turkey season has a much higher accident rate because people violate hunter rules and instead of calling in Turkey’s they pursue them and find out the other person calling Turkey’s is another hunter, and you better  hope he’s got good eyesight and knows you aren’t a Turkey.  There are rules, but you cant make people follow them.   If you care about your life and other’s around you’ll do some research and improve any safety measures you can where every you can.  To me guns should be locked up or in a holster or a gun safe.   You can lock your CCW gun up in hidden gunvault safes in the kitchen  or living  room instead and keep your bedroom gun locked up in drawer safe or a wall safe.   If you can do anything that can prevent the wrong person from accessing it, put up all the firewalls  you can to slow them down, don’t make it easier for them.   We have this on internet security, password protection, and we put dead bolts on front and back doors.