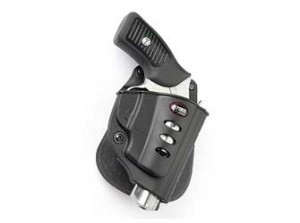 There have been many changes in the materials being used in modern sidearms.   Many of the polymer firearms have a huge advantage over their previous counterparts primarily due to their corrosion resistance.    Along with corrosion resistance, many of these firearms also depend on lubrication far less.  Gun holsters have progessed as far as being made in materials that can handle sweat and dirt resistance.   I’ve heard plenty of stories about people ruining the finish on various blued firearms just from one or two harsh weather environments and people not getting around to cleaning them in time.   I’ve personally seen a few revolvers end up being horrible pitted after an operator sweat up a storm and never bothered to clean the sidearm.

Many of the revolvers that I saw end up with this corrosion would have survived if used in a non-leather holster.   People have to realize that even though the gun may be off their body, some holster materials will actually absorb sweat and transfer that through the  holster and on the sidearm.   There are plenty of gun holsters out there being made for your Smith & Wesson, Taurus or Ruger revolvers, so don’t think that just because you mostly see Glocks and M&Ps in kydex type holsters doesn’t mean you  get get one for your six shooter.  I have a nice Fobus holster for an SP101 and it holds up very well whenever I am expecting to sweat a lot.