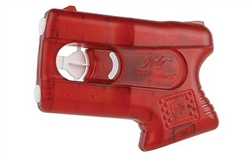 The new Kimber Pepper Blaster II is a huge improvement over the early Kimber Guardian Angel.   The device has a better grip and actually has sights on it.   Although you may at first think they are expensive, they almost 2xs longer than bottle sprays and are easier to hold and aim than any flip tab bottle.   If you are carrying a firearm as a Civilian, carrying a backup or secondary weapons, other than a knife that give you even more security in defusing a hostile situation without the legal ramifications of using a firearm may only cost you $20-$40, would you take it?

We all know there are people that are living in States where carrying a firearm is not allowed, but considering how good modern technology has become, Sabre Defense pepper sprays and tasers have become viable options for self defense.   We also highly recommend people consider carrying some level of less-lethal device other than a knife or a firearm because there are are more than likely more incidences where dealing with an obnoxious bully or drunk can be diffused with pepper spray than waiving a firearm and then having to deal with law enforcement in a he said she said.  While it is true that many Law Enforcement Officials have been using tasers, even those have proven to not always workASP Pepper Sprays and many other options for backup or primary non-lethal defense