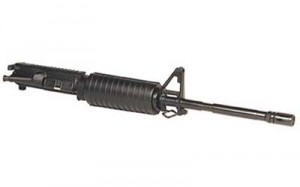 Even though the short stroke and other piston designs have come on the market, and these guns all operate much cleaner, the AR15s DI guns that are being fielded these days are far more reliable than the M16A1 that was issued in Vietnam.   Designs and improvements of metalogy has been tremendous and this can be noticed just by feeling the difference between one bolt carrier and another.   Another major point about why the AR 15 guns have caught on is that they are so ergonimically superior to most of the military style guns out there that they are easy teaching tools.   I normally start people out with learning the fundamentals with a 22lr bolt action with iron sights, but when I’m dealing with an adult that is not afraid of recoil, a .223 A2 style Carbine is an excellent staring point.

It seems that every time I pick up another issue of Swat magazine, American Handgunner, Special Weapons, Guns & Ammo ect. that there is yet another advertisement for another company making another AR 15 gun.   The AR15 is now the most mass produced rifle in America and they are as common as a can of Coca-Cola.    I don’t think I can name more than 3 calibers that the AK was made in, but i’ve already lost track of the number of calibers that I have seen the AR15 being made in.   You can get them in pistol caliber carbines and from my experience, they run very well.   I have to admit that I am glad to see that the AR 15 Upper Receivers have taken a giant step away from the direct impingement design that has been so hotly debated.   I am a big believer that with todays technology and the technology that are LEO and Military are dealing with, using a firearm that is such high maintenance, is a waste of valuable time.