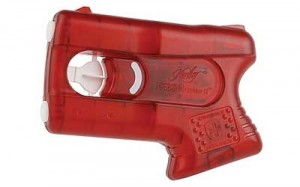 There is a lot going on in  the news about the Knock Out game and various self defense shootings and race.   There is a problem in our society where the truth can’t be told but the media and Politicians use it for their way of stirring people up for their own political gain.    It really is sad how the real picture, is Americans are turning on each other.    The 2nd Amendment is there, but the life altering impact on using lethal force is something that is not discussed enough.    Florida is the focus much of this conversation but those that carry firearms for self defense should seriously look at what the cost of using a firearm vs using some of the modern less lethal options.

Some of our hottest selling pepper sprays, both stream, gels and fog are still the keychain devices, I guess it’s just a comfort but it’s really  not the best option.   We aren’t all going to be able to carry a 4oz bottle on a duty belt like many law enforcement do, less lethal force devices like the Kimber Pepper Blaster have a very long shelf life and if you can get over the price, this is an extremely practical devices that is about the size of your average .380 pistol.   With all the issues going on in society, I’d much rather hear a defendant say they attempted to use less lethal force but had to use a firearm, thinking ahead and being prepared is never an old idea.