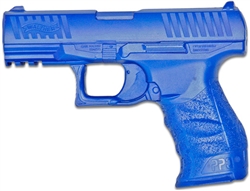 We’ve been around long enough to know that we can trust that Ring’s molds their plastic guns with outstanding quality.   I recently spoke to a firearm instructor that told me we need to carry airsoft because it’s better than blue guns.   Well, I told him that Airsoft isn’t really the thing you should be bringing into a classroom because people still need to wear eyewear.   Ring’s Blue guns are still relevant to the industry because you can do demonstrations and training with optics, weapon mounted flashlights, and firearm safety without fear of pellets flying at you.   Anyone that has been around firing ranges long enough can tell you about all of the accidents that could have been avoid with better training.

Whether it’s holstering and un-holster, training to use a light on a handgun, it’s always best to teach people in a classroom before going to a range.  Recently there was an incident at a range where someone had a piece of hot brass go down their shirt and they reached for the hot brass with the loaded gun in their hand to retrieve it and ended up discharging the handgun and shot a person standing behind them.    When people are new, they don’t have the muscle memory to be safe, I will never move someone to a live fire range without knowing that they are ready.    It is also a fact that Ring’s Blue Guns are highly sought after by holster makers, and we all know from SHOT SHOW that there are always new models coming out every year.