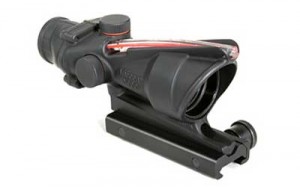 It seems that the M4 AR15 variant is hands down the most popular carbine in existance in the United States.   There are plenty of AK and European military style rifles out there, but the accessorized M4 is king.    When I first stepped into the high speed tactical carbine school, I was going there from previously owning only Kalashnikov variant rifles.   The biggest promotion I heard from all of those owning an AR15 was how accurate they were.   It is true that the M4 and AR15 family of rifles ARE the most accurate combat rifles, but that doesn’t make them the most effective.   Ever since the Iraq invasion, the notion of just sending in a group of guys with M4 Carbines or M16s without a 7.62 DMR is not common.   There was a lot of hype about the military digging up M14s and giving them this role, but now that several years have passed, the military has been working with newer models of 7.62 rifles to eventually fill that role.
Along with the return of pistol driven guns, the 5.56 is being put in its place and other caliber rifles are being deployed.  The 5.56 and 50 Caliber rifles are doing their jobs quite well, but is some environments the 50 caliber is an over kill and something in between 7.62 and 50 Cal was needed.   The 338 Lapua seems to be filling that role very well.   The combat optic has also been evolving due to the fact that engaging enemies from 100-600yds is not very common and many of these rifle scopes are too much magnification for close quarters combat.    Eotech has a mangnification scope that allows you to go from 3x to zero magnification with the slip of a switch.    Trijicon ACOGs are hands down the #1 combat rifle optic, but red dots and various color and configurations of reticles are being used.   Each has it’s given purpose and it’s up to the operator to determine which application is best for them.