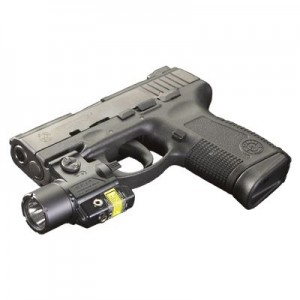 I think there is going to be a major change in the way we think of lights being mounted on firearms and in my opinion I wouldn’t spend too much money on firearm lights unless they were for my primary weapon.  It’s good to have more than one firearm available or atleast configured the way you want it for self-defense, but flashlights are getting smaller and more powerful and those bulky lights and expensive mounts are going to be a thing of the past in the next decade.   I suspect that in the next few years there will be pencel thin flashlights mounted on firearms that put out 200 lumens at ease.

I always hated the idea of putting flashlight on a handgun because that meant having to go through the holster testing ordeal all over again.   I have a bunch of Elite Survival holsters coming in soon that will get the job done, but Streamlight Flashlights especially the TLR-1 and the newer TLR version are probable the biggest sellers now.   The cool thing about them is you can put them on handguns and rifles but I wouldn’t blow more than $300 on a weapon mounted light just yet unless, like I said it was for a primary weapon.   If you look at how much LED technology has improved and light gathering technology like solar cells, smaller batteries and smaller lights with larger output are right around the corner.