I always enjoy watching the weekend warrior guys show up with their $4000 worth of M4 and accessories that are the first ones to panic and want to leave the range if it starts to drizzle.   The idea that your $4000 rifle will some how get ruined in the rain and the majority of firearms like it are expected to be combat reliable.   Well… what is combat reliability?  Combat reliability is a gun that will take a level of abuse in bad weather and dirty conditions without malfunctioning.  If you have a military issued rifle, the gun better darn well be combat reliable and a little bit of rain shouldn’t concern you.

Combat optics are are also given this description because they better take the abuse and still hold zero.  The gun should work if it gets dropped and the glass better not break.   I’ve retired a few rifle scopes because they would fog up and I learned the lesson of wiping all of my hunting rifles down with a light amount of CLP whenever I brought them back from a trip. Take your gun cases and your firearms out on a day when the weather isn’t that great and have some confidence.   A good nylon rifle case should protect your firearms from moisture and dirt and there’s nothing to cry about if you know your gear.

While I must admit that I have never taken a shotgun training class, and I have not yet gotten around to watching the Magpul Art of the tactical shotgun DVD,  I have seen enough things happen on firing lines to know that the more stuff you put on a firearm, the more you are complicating things.   The more you complicate things the more you have to worry about things falling off or getting snagged.  Slings are extremely useful tools and it will get real uncomfortable carrying a firearm with out one.   I recently picked up a shotgun scabbard because I personally do not like having slings on a pump shotgun.   The fact that you have to manually cycle the gun and your sling will be moving around while you do this, I’ve  seen too many times where people’s hands get snagged up.

I must remind you that this is a personal preference, not everyone has these types of problems.   There are ways of training to get around some of the issues, but they can all  be eliminated by not having one on.   My shotgun scabbard is basically one of my rifle cases because it is attached to one of my primary shooting backpacks, I can just toss a lever action rifle or small bolt action into the same case and carry it on a hunting trip.   Some of my friends have the Galco battle sling on their shotgun and it is  a very thick sling.   Some people may prefer this because it is easy to grasp and feel.

When getting asked the question how many guns we own, the question should be asked “what do I not own?”   After several  years of dealing with the high speed, low drag weapon systems, and after watching the 2008 election results, there was huge jumps in ammo prices.    I thought to myself when 5.56 ammo was hitting close to the $700 per 1000rds range, that maybe ammo was going to be worth more than gold soon.   After putting a little thought into why the ammo prices were going up, I pretty much guessed that they won’t stay up that long in a bad economy, because nobody in their right mind would spend money on something that was 200-300% over  inflated.   I decided that if It was reloaded ammo, I wasn’t going to touch any factory ammo, and it was now time for a 22lr bolt action rifle.
I picked up a Marlin 925 bolt action rifle with iron sights and I was planning on not ever putting a scope on this.   As a firearms instructor, this was a basic platform for teaching basic shooting skills.   There is nothing wrong with teaching to shoot firearms to new shooters with a scope, but in my opinion iron sights are a better starting point.    This Marlin 925 was extremely accurate, but I  noticed that my groups were always left of center.   I looked at the rear sight adjustment and noticed I really couldn’t accomadate for the windage.   I was a little depressed and packed up my Marlin in a one of the rifle cases I had with me.  As a kid, I always compensated for a guns accuracy flaw by aiming at a different point, but as somoene who’s been able to hit the X at 600yds with other firearms, this off center accuracy really bothered me.   I’m looking to put another adjusteable rear sight on this or possible put a scope on this and pick up another bolt action that has better sights.

SKB and Pelican make gun storage units that will protect your guns if they get knocked around.  The foam pads can always be customized for specific guns and gear and I highly recommend doing so.   I strongly believe in buying gun cases that are for specific firearms and especially so for rifles.   You will be able to fit varying sizes of handguns in the pistol cases depeding on which way you place them, but rifles will get tricky and since most of them will have optics, you gotta be careful how much you pack them.  There are even some rifle cases that can hold your magazines, pistol, and pistol magazines.

There are always pros and cons of certain types of gear for your rifle and there are always trade offs.  A gun sock is good for protecting your guns from some levels of friction, they don’t take up much room in storage and they also don’t add weight to your gun in transport.   Any padded gun case will give you easy  use and easy storage, but when you start transporting firearms that are $1500-$5000 you’re going to want to think about hard rifle cases.   Granted, a sniper drag bag that is properly designed will give you plenty of protection and easy to drag around, but I’m talking about range days or inter State transportation.

Not everyone needs to think about long deployments in Afghanistan when getting their shooting gear together, but knowing where your guns and gear are can prevent you from making silly mistakes.   I’ve heard plenty of stories that sound funny at first, but I  know it wasn’t funny when it occurred.   The stories are about people getting a day off from the family and driving an hour or more to a gun range and finding out they didn’t pack any rifle magazines, forgot the ammo, forgot to put a gun in a bag ect.

For those that have been packing bolt action rifles and taking them on trips, you probable haven’t thought about the need for rifle cases that had lots of storage or pockets, but those of us toting M4 Carbines with accessories and gear and those of us testing the ballistics of ammo out, we’re in a different category.  Bulldog and Uncle Mikes have inexpensive gun cases for most of your rifle case needs. 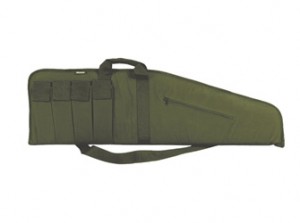 Assault rifle case cases can also hold ammo and store sight in tools, too.    Uncle Mike’s also has an inexpensive line of rifle cases that can hold anything from a collapsed M4 Carbine to a full size A2.   The soft cases are soft, but can still be folded in half to be used as a rest if you’re will to be creative on the firing line.

Sometimes people think a gun case is for transporting your firearm from your home to the range.   Many tactical gun cases can actually help keep your gun and gear all in one case.     There are several gun cases that can hold 3 or more rifle magazines and its a great way to keep your magazines organized.   I personally like to store my 5.45×39 magazines in a Bulldog Hybrid assualt case and mark the bag, that way I can just grab the rifle from storage and throw it in the bag knowing my mags are already there.