I remember that is now only about 12yrs since the era of my life when I walked around without a cell phone on me.   I remember when people carried pagers and had to walk away from a Thanskgiving dinner to answer an emergency.   Much has changed in recent years in communications, but not much has changed as far as self defense and emergency preparedness.   I’m still looking for the right size flashlight that I can carry 7 days a week, but I’m either bothered by the size of the ones that I do like to use or the smaller ones are too expensive and I’m afraid I’m just going to loose one of the darn things.

The cell  phone is probable now your #1 tool, but flashlights and knives are extremely useful in emergencies.   If you or someone in the road is trapped in a vehicle, a small tactical knives could mean saving a life and trying to tear a seat belt is impossible with bare hands.   I have carried gas can and fixa flat in my car because I’ve done so many road trips where stupid nail would have meant waiting 4hrs for a tow truck or walking 10 miles to a gas station.   Flashlights are also something that should aways be in a car because there is nothing worse than a dead battery or dangerous environment without being able to see your surroundings or flag someone down.

There is a mindset that goes with the responsible Citizen and it’s not all about firearms and self defense.   I’m a big proponent of getting First Aid or emergency response training if you are a concealed carry holder or if you have taken defensive firearm training.  Not only are you preparing yourself for defending  yourself, you may be involved in a situation where others besides the BG may have been shot or injured.  I’ve witnessed enough violent crime in my life to know that some old guy or an old lady may have a heart attack in a crisis situation and knowing  how to deal with that is important.

I keep a spare magazine in my car for the nightmare scenario of needing it, but I also carry jumper cables, fix a flat and tire pressure gauges.   Another thing to consider having is small fire extinguisher and something you can use to cut a seat belt or smash out a car window.   Breaking car windows can be difficult if you don’t have the proper tools, but  many tactical knives and something like the SOG Fusion tactical tomahawk will make it easier to smash open a window to free someone from a burning car.   I witnessed several car accidents that turned into car fires and sometimes people will become unconscious after an impact. There are many ways to save peoples lives.  Having the tools to do so 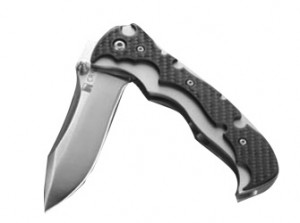 I have a few knives that have been passed down through a few generations.   Most of them look like they were used in Boy Scouts.  Some were Bowie knives that must have been fun to use, but were really an over kill.   Not that there is anything wrong with it, but carrying those around all the time made a  kid feel cool, but mostly likely got in the way.   Recently I got out to do some nature conservation and decided to spend the weekend at a State Park.    We weren’t allowed to bring in our own firewood which I normally do, just because I like to know that I’ll have good dry wood for cooking in need be even if the weather isn’t good.
At the gate of the park, we picked up a few bundles of wood, we took it back to camp and I brought out my Columbia River folding knife and slashed open a bundle that was shrink wrapped and tied with a rope.   I’m still not sure what tactical knives are, but this one works for me.  A co-worker of mine was tugging and pulling on his stack and had trouble getting it undone.    Everyone likes to bring knives for cooking, but even just a simple folding knife in your pocket can be very useful.   Whenever your camping, there is room for you to pack a knife.

Utility knifes can be tactical, but my idea of a tactical knife is something with a good sharp edge that can be used defensively, can pry things open and also be used to cut a seat belt without sawing it.   Folding knifes are in their own category and I know some people frown on them, but you gotta use what you have and know in your mind what it is capable of withstanding and what it can be used for.

I think that sums up about 75% of what the tactical knives market and the remaining 25% have a different reason they own a knife.   I think a lot of America has lost the idea of how useful a knife is these days, probable because people have access to so many fancy tools that the idea of having to sit there an sharpen something that knife owners know is a tool, is something they don’t understand.  Nowadays, most highway emergency reponse and law enforcment are carrying knives that can slice a seat belt in half a second.