One of the best analogies I’ve ever heard when discussing a Mini 14 vs AR15 debate over on the The Firing Line.com was a debate about how crappy the Mini 14 was and how it didn’t hold up.   I remember a talking to someone that referenced that the difference between various rifles was the difference between a 9 iron, a wedge and a putter.  The Golf analogy has stuck with me and have often used it in Training, even when people talk about different ammunition from M193 to M855 and the M262.    Each one of those has a different velocity and terminal ballistics.    When the discussion is about Trijicon ACOGS, Eotechs and Aimpoints, the same analogy applies.   The AR15 is probable the most versatile firearm in existence and adding different optics and accessories to it can give you a short range advantage or a long range advantage and often, not both.

A good operator is going to know the limits of his firearm and push the envelope if even need be and the usefulness of Crimson Trace Laser grips isn’t going to be different than any of the previously mentioned topics.  One thing that I have recently proven to myself is that green lasers have an advantage over red laser grips at longer ranges.  One reality about firearm engagements is that “hits” are what count and being under stress is something that many never push themselves to train for.   Lasers are good for I.D. Targets and if you’ve ever been in low light situations the ability to point, still defend yourself and know where your muzzle is actually at, Crimson Trace Laser Grips might give you an advantage in your home or in your line of work.

I won’t talk to you like your an amateur and need to have trigger control explained to you but there are many people stopping into our store that have lasers on their guns but still don’t understand how to use them in a defensive manor.  All firearms and accessories are tools that you deploy that can improve your ability or impeed on it.   There are plenty of things you can attach to a firearm that  you think might make your more accurate but many of these devices can slow you down if you don’t train to use them.   We have several Navy Seals stopping in our store with their Glock 17 handguns and use Viridian laser light combos and they speak highly of using the green lasers.   One of the main things they talk about is identifying targets in low light.  For instance, 6 guys break into a house to clear it and lasers come in handy as pointing devices.  Instead of hand gestures or spoken words, a tap of a laser on a wall means “shoot here” or “move here”.

You do have to be very careful about attaching lasers, lights and laser light combos on your gun because I’m a big believer in having holsters for every handgun that you use defensively.   I have sold many of the Desantis Rail Dyers to guys that has the Crimson Trace Laser grips on their firearms because in the event they had to use their Glock 17, Beretta 92FS or Sig 226 late at night, being able to easily re-holster your gun gets easier if you use a holster device like this.   Lasers should be used as on/off tools just like white lights, they can give you away in some situations and make you a target, or they can be tremendous assets to help you win a fight.

That’s an easy answer for anyone that has been on a range as long as I have.  My first experience with a firearm with a laser was with one of my friends and he mentioned that he had bad eyes and need it.   That was about all I needed to know about why somebody would put a laser on a firearm.  Look at the changes that have taken place on firearms and the way people put hi visibility sights on Glocks and rifles.   I’ve seen AKs glowing sights and watched how well someone could shoot with them.   Even though you may turn your gun into something that has pink and yellow sights, you will find the contrast will improve target acquisition.

Lasers are showing up on everthing and now that most handguns being issued to police and military have rails on them for flashlights, lasers are also put in the mix.  We are seeing lights like the Veridian flashlights and we’ve been moving plenty of Crimson Trace Laser grips for concealed carry pistols.   The LCP is hands down the most popular concealed carry gun, but I still have issues with the .380 caliber and what it does for the average crackhead.  Do some research on what type of holster you want and make sure it works with your laser properly, lasers are are good when you need them.

Lasers have been around for a long time and there are plenty of stories out there with credibility that involved Law Enforcement using them on firearms and then removing them because they were a liability.  With each accessory you put on a firearm, there is always a chance that it will fail or snag on something or change your perception of  the way you are engaging a target.  Although laser grips can have their advantages, you have to train to use  them properly. If you are looking for that dot to exactly where you want it to be you are wasting time and giving your opponent an opportunity to get his sights on you.  I have done enough testing and evaluations with new students to know that the majority of individuals act a certain way when given laser grips, they slow down when engaging targets.

For those of us that have taken Carbine Courses, we know that the AR15 his a very  high sighting picture and in a home defense or hostage situation, you better know your point of impact or something catastrophic can occur.  Crimson Trace Laser Grips have really picked up for the concealed carry market and they fly out of the door for those carrying pocket guns.  The reality about most pocket guns is the sights are never used.  Some guns like the Rohrbaugh R9 come with and without sights, why… because at certain ranges and certain calibers you train not to use them.  If you using laser grips for carry purposes, you are better off training to use it as a highlighter for low light threats but you must always be aware that your point of impact changes over distances.

I remember when they first started showing up in law enforcement circles and then there were the debates about how cops were getting show because they were not using instinctive shooting skills and worry about trying to get the dot on target and ended up getting killed.  I can’t name a story to back that up, but with my experience in shooting and training on the firing line, I believe that it is true.  I jumped back into the laser grip world with my Smith & Wesson Model 637.   There is a place for laser sights, but it really seems to have caught on with smaller pocket guns than duty guns.

I think it’s not a debate that getting hits on target is more important than taking your time and trying to get the perfect hit.   In the real world one stop shots are not a reality.   Crimson trace laser grips are pricey, but i can’t complain about battery life.   I’ve put clost to 1000rds through my Smith & Wesson j-frame and I have not had to change a batter yet.  The real advantage I see with having a laser like this on a carry gun is to get a little bit more range out them and be able to use them in low light situations.

There are now so many things you can do to a firearm that you better be real careful that you think things through before you find out at the wrong time that  your guns and gear don’t match up very well.  One of the most common problems I am starting to see on the firing line while watching defensive weapons training with handguns is this.   Operator replaces the front sight on his handgun to a slightly higher version, gun fits in holster.   When the operator walks onto a firearm line and tries to quickly pull the firearm out, the front sight snags on the holster on the way out and the gun spins forward out of the operators hand, and then flies forward.

The obvious issue with gun holsters is adding on laser grips, something like the Crimson Trace Laser grips may mean tweaking your holster or having to buy a new one, be real careful about the gun sights though.  Many holsters don’t give you the specs on what kind of sights it will tolerate and this is something you’ll have to do on your own.   Lasermax laser grips will not be an issue due to the fact that there is nothing protruding out 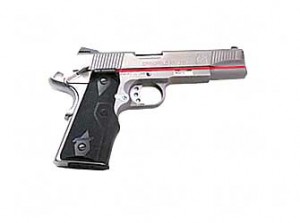 There has been much talk over the last 2 decades about lasers and flashlights being a liability to an operator more so than an asset.   In about 45 seconds of teaching closer quarters combat and inside the home self defense, a laser is an obvious outing of a users location.   I understand that if you are trying to sneak around  your house and take out a threat, a laser that is turned on will tell the threat you are near.   Flashlights run the same risks if they are used incorrectly, but try and tell a SWAT Team to enter a dark room and determine where a threat may be hiding and whether or not an innocent bystander is hiding in the dark.
The simple tactical solution…. know when to turn your laser on and off.   I could twist the scenario around even more.   If someone broke into your home at night, and you or your wife was hiding upstairs, pointing a laser on  your downstairs wall or floor will notify the threat that you are waiting for them and the gun is pointed in their direction, do you think  they will choose to come  upstairs?  Flashlights can temporarily blind a bad guy, but it will also tell him which direction to shoot.   If you are in your home and a break in occurs, turn all of the lights on in your house and you won’t need a flashlight.     Crimson Trace Laser grips need to be thought of in offensive and defensive tactics.   There are times in football that you go long, and other times you just gotta block and stay on the line of scrimage.