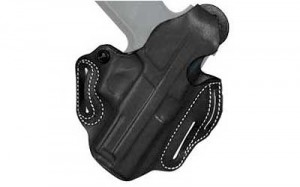 Sticker shock just goes with this business, people that have no idea why things are priced the way they are but it’s extremely rare for me to personally say something in this industry is over priced.  Recently several customers have told us they had issues with certain weapon mounted lights and all I could tell them is there is a reason why people spend another $100-$200 for Surefire flashlights over some of the lesser expensive weapon mounted lights.  In the 10yrs we’ve been in business nobody has returned a Trijicon ACOG saying it won’t hold zero and the glass fell out.   I’ve had it happen to me personally with 2 optics, but both of those were under $200.

The same is going to go for firearm holsters and I can tell you from personal experience that I have broken, and had plenty of inferior holsters before I started increasing my investment amounts.   I’ve had plenty of broken kydex holsters in my life but have not ever had any Leather Desantis Holsters break, tear, or rattle.  There are plenty of magazine pouches I’ve used where once they were broken in, the mags started to rattle and it was just downright annoying.   A customer recently returned a Don Hume holster that had the finish peal off it but I told him that’s why they are $20.  The closest Desantis holster to that design started at $54.99 and nobody returns them because the colored peeled off.