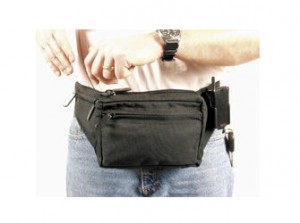 When Summer rolls around here it sometimes gets difficult to carry the firearm that you carrid in the Winter.  Several of my Law Enforcement buddies have told me that they carry Sig 230’s most of the time and keep it simple.   I have friends that carry full size 1911s, they can conceal them very well but carry it near the spine is not a safe way to carry in my opinion and it’s hard to run and play baseball when  you carry a large frame firearm.  The Glock 26 is another firearm that many carry in the Summer because its a much shorter gun that can almost be carried in a pocket.

I never bash people for carrying in a fanny pack because I had to do it for a job and most people I talked to said I looked like a Pizza delivery guy and it fit the situation.  I noticed many women carrying at parks with something that could easily be Blackhawk gun cases or a Blackhawk Fanny pack.   The only bad thing about some of the tactical bags and the fanny packs is seeing the name on the bag which can be a dead giveaway to a profession, but from my experience the dumbest criminals tend to be the biggest threats.

We were probable one of the first stocking dealers for the Elite M4 Roller from Elite Survival Systems and although we thought it was a great idea, we know how hard it is to sell certain items online.  Like so many things that are sold online, it’s hard to tell what it really is until you feel it in your hands and hold it.   There are lots of times people order something and don’t pay attention to the dimensions and end up with something much larger or smaller than what they wanted.  Sometimes even the images are not precise.

We we listed the Elite M4 Roller we knew what we were getting into and we  have never sold a bag as large as this but let’s be  honest, how many trunk bags are designed to be used like this and are so well thought out.  The Elite Survival Systems gun cases are our favorite nylon gun bags because we really cover the grounds with all of the variations.  We tend to deal with higher end products like LWRC, Noveske and the like for gun parts and accessories and we thought it would be fitting to avoid the cheapest and least expensive shooting bags.  The M4 roller fills a niche that local Paramedic and Law Enforcement wanted and when they walked in the door at our shop, they got to hold one in their hands and roll it out the door. 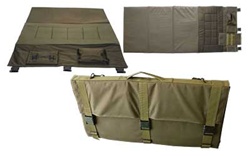 There are plenty of times that I have wondered why  certain people even bothered to spend so much money on firearms when they were afraid to get them dirty or wet.  There is nothing wrong with being a bench rest shooter because that in itself is a skill of it’s own.   Some people don’t realize how much talent it takes to make a bullet, and the hard thing to do is make multiple bullets hit the same impact point.   I have moved away from bench rest shooting because I’ve found my accurate loads for most of the 45acp, .308, .303 and 30/06 loads I shoot.  If you really want to become proficient, you really have think about getting off the bench.  Using a rifle sling is important, but it’s not the only option.

Serious tactical shooting skills will require you to get off a bench rest, but learn how to make your own in the field.  I have a few good shooting mats that work as rifle cases and they can unzip and fold out to be shooting mats.   I suggest getting a good backpack that can act as a shooting rest and if you learn to get yourself into good physical condition and be able to move your body, you should be able to stay in the position and shoot accurately.   The US Peace keeper shooting mat is 72″ long and 36″ wide and will give you something to lay on other than mud and dirt.

I recently attended a World War II gun club event and had a lot of fun being there.    I have always know what I liked from the WWII era, but I never really jumped on the collectors bandwagon because most of the guns are in my humble opinion, collectors items.    Many of the bolt action rifles that were used during the war are chambered in .303, 8mm and 30/06 and still have a place in the hunting community, but for home defense or modern combat, those calibers are not very common and there aren’t very many gun chambered in them anymore.   Finding ammunition is very hard and with todays inflated prices, it’s very much a collector thing.

The M1 Garand is a great and powerful for it’s time, but the function of it is very dated.   Having 8rds of 30/06 in a semi auto that is capable of hitting targets out to 600yds easily is far more than what the average deer hunter is going to need.   The M1 Carbine would probable be my favorite if the caliber wasn’t so hard to get and there were more bullet designs that could be applied for defensive purposes.   The M1 Carbine is more powerful than .357 magnum, but the gun is designed for FMJ and would urge against them for home defense.   My favorite is still the Thompson 1927 which can be toted around in gun cases that look like a violin case and will get a lot of laughs when you show up at the range.   The 45acp gun is very reliable and will shoot many defensive rounds.   The 45acp you get out of this gun is a powerful close range weapon. 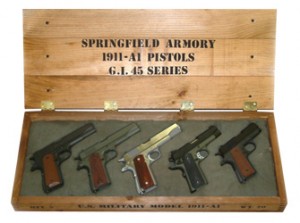 Long before I moved to where I am presently living, I was able to turn a closet in my home  into a gun safe.   I think there needs to be some serious thought put into how safe it is to keep your guns in a closet, but depending on the location in  your home and how strong and secure the door is, the only bad thing other than any a break in would be fire.   If you have a good fire alarm system in your home, the notion that your house is going to burn to the ground shouldn’t really be much of a reality, although it is possible.   There are ways to fire proof areas of your  house especially around closets that can help you avoid having to bring a 500lb safe down your basement steps.   I strongly recommend keeping any kind of firearms safe out of visibility because I have learned that a good $2000 gun safe will only slow a thief down, but not necessarily stop them.

If you have the time to build a small fire proof room  in your home for your firearms, you can avoid all of the clunking and banging around that can happen in other safes.   There are good pistol display racks like the Versatile rack that can organize and spice up the look of your collection.   Springfield Armory also has fun looking GI 1911 gun cases that are a wooden box that looks like you just received it from an airdrop in Europe.  Gun cases can help you keep your guns and stuff organized and protected, but it’s no fun to have to store your guns in a gun safe that is cluttered.  Build yourself a gun closet.

There has been a recent issue with a man who moved from Colorado back to New Jersey and has been arrested and thrown in jail for transporting firearms that he legally owned.   I won’t go into the whole story, but it’s available with just a google search.  From what I am reading about it now, there was something that occurred and the police made a stop and searched this individuals car, they found two unloaded handguns in the car and he was arrested.   Transporting firearms in non-gun friendly States has been a real problem for those traveling across State lines for hunting trips.   I had the opportunity to take a trip to Maine and I had to plot driving routes to avoid as many blue States as possible although  avoiding all of them was impossible.

So many of my friends own SUV type vehicles and I have urged many of them to think about tinting the windows, not too dark, but darker than what they had, just because they can dramatically reduce their chances of having a theft by making it harder for the less  honest in society,  from seeing any firearms even in gun cases or valuables they are transporting.  Most of the smash and grabs that I have heard of were for laptops and the CCW stuff was under or near it.   Of all of the times I have ever been in a vehicle stop, being polite to a Police officer avoided any friction and I have never had issues with searches.

With things being pretty shaky with our economy right now,  I have been doing a lot of thought about what I am planning to use at training sessions in the coming year.   I have watched the prices of 5.45×39 for almost 2yrs now and seen very limited movement.    Almost 10yrs ago I did a range test at a 500yd gun club where I tested a Romanian SARI and a Romanian SARII side by side.   I engaged targets at 100yds and tested groups sizes.  I’m very much aware of what the AK was designed to do and expecting better than 4inch groups from a 7.62×39 gun is a  lot with military ammo.   I know you can do better with handloads, but that’s another story.   As I  proceed out to 300yds, I had more and more  hold over with the SARI rifle.   The SARII gun was nailing targets and I don’t think I was holding more than 12 inches over the targets.   Even though I thought the gun was a little clunky, it was as flat shooting as an M4 Carbine.

My LWRCI upper was something I have wished for, for several years.    I know I will  be the first amongst my friends to test this gun out, but it seems to be a better thought out idea over the Smith & Wesson 5.45×39 upper.    The Smith & Wesson is a direct impingement gun and even though they will fit in the same gun cases as my LWRCI, I don’t thing they are the same.   Say what you will about the AR design, but this LWRCI upper is a combat gun and not a plinking gun.   I wouldn’t expect a gun like the S&W to hold up to much abuse unless there was a domestic manufacturer of 5.45×39 ammo.