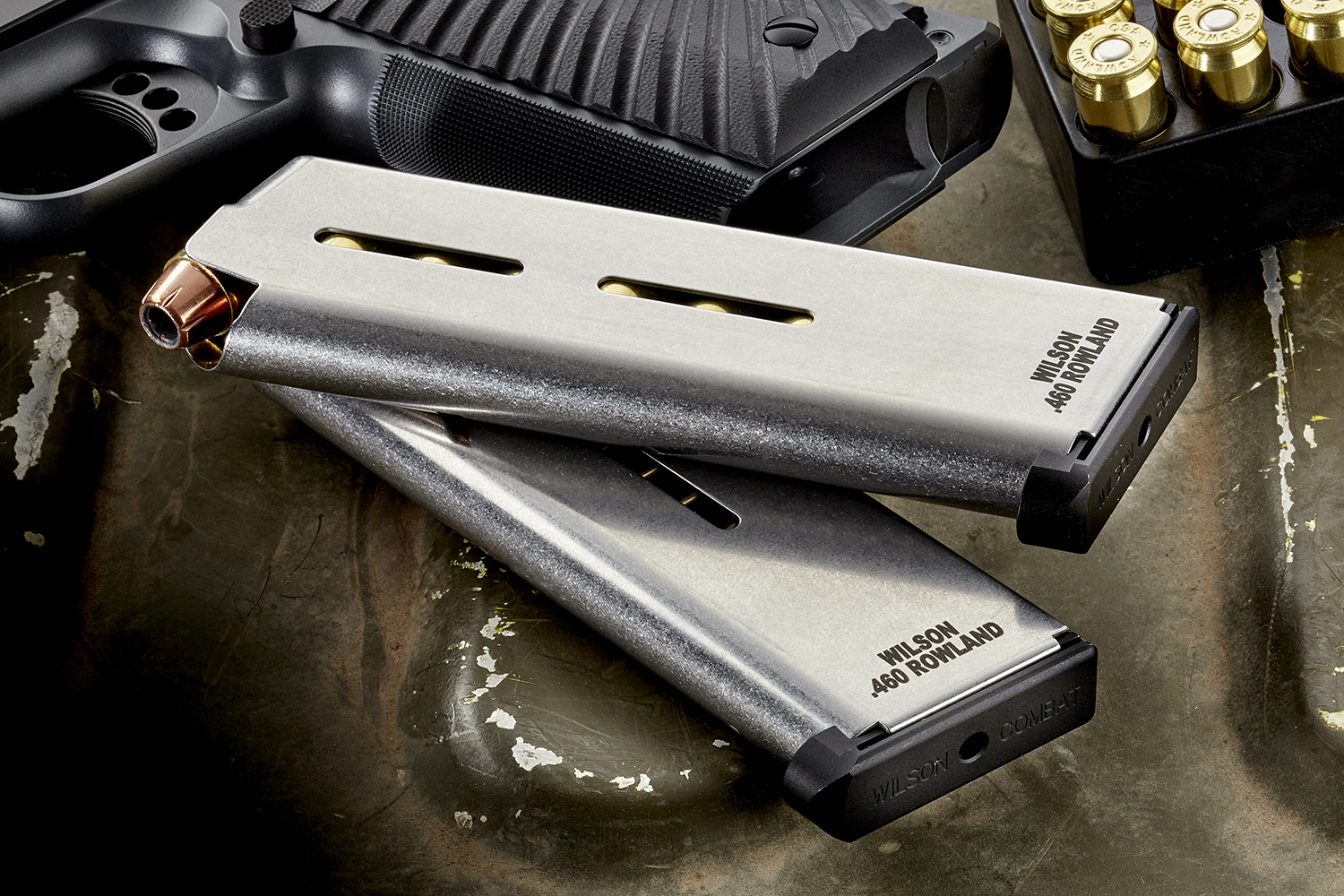 mentioned many times in my blog posts that my first handgun was actually a Colt 1991A1 and I got a screaming hot deal on it.  $375 out the door for as far as I know an unfired firearm that was brand spanking new.   My first experiences with it were like many, it did not run out of the  box and I had to do some minor tweaks to my approach for carrying this firearm, what type of ammunition to use and what type of magazines.  I only had 1 magazine with it when I got it and it did not last more than a couple reloads before the magazine lips started to bend and the gun would close on an empty chamber, the problem was that I was using USGI magazines that are in all practicality, throw away magazines.

There are many new fancy 1911s out there Kimber is what I consider fancy as well as Les Bauer.  I have seen plenty of feeding problems for people that did not use Wilson Combat Magazines and eventually they figure it out and go to an online discussion forum and find out what works best. We recently noticed that some companies have upgraded their standard magazine capacities have learned the technology to do that, I have not found any truth that the Wilson Combat 8rd magazines were less reliable than the 7rd magazines.  I think an 8rd 45acp is the best option since 10+ rounds of 45acp tends to make the guns too heavy.

The best selling 1911 magazine is hands down the Wilson Combat 1911 magazines.   We couldn’t narrow it down to just one magazine because there are several different types of magazine bases that competition shooters  might want something that a CCW owner doesn’t want or need.  The Wilson 47D is our most popular 8rd 1911 magazine and the #47 is the most popular 7rd, but the Elite Tactical Magazines have gained ground for the competition shooters.   The ETM magazines have a number base plate and the windows are in a different cut than the tradition Wilson magazines.   They are higher priced than the Chip McCormick Magazines which come in as a close 2nd as far as sales.

The thing that many 1911 firearms seem to have trouble with are the magazine follower/hold open tabs.  Many of the GI magazines wear and bend but the one piece Wilson Combat Magazines have a more reliable balance and catch that holds the firearm open when the last round has been fired.  I personally don’t have an issue carrying 45acp ball ammo because when I carry that gun it’s usually when I’m up in the mountains and more likely going to have to use it against and animal than in a highly populated area where over penetration might be an issue.   I have heard rumors that 8rd magazines are not as reliable as the 7rd magazines but I have never witnessed that. 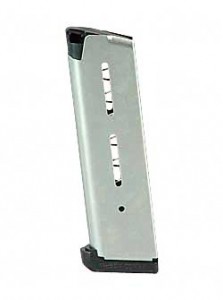 I’ve had many family members and friends ask me to go shopping with them to help them pick up a firearm.  There have been many times that I have warned people about buying a certain gun even though it looked like it was a good price.  Many of the times it was a firearm that had obviously been customized.  The biggest warning sights are usually when the triggers have been changed.   That can mean that somebody was lessening the trigger pull weight and it’s also a hint that it was turned into a target gun and there may be other parts like springs or buffers inside it.   I have a family member that purchased a 1911 because he had one in the military and the one he eye balled at a gun store had exactly these issues.

After we took this firearm to the gun club it actually jammed up on us several times, I tried to take it apart to see what the spring looked like but it had a full length guide rod and I did not have any familiarity with that.   We even tried several of my wilson combat magazines that usually solve many 1911 problems but the gun still hung up.   We later found out that there was a tool we needed and there was in fact a buffer that was decaying inside the gun and causing all of the malfunctions.   There are so many new 1911s out there, Sigs, Les Bauer, Kimber ect. that you have to watch the amount of tinkering people do with them because not all of the 1911 parts and especially holsters are going to work with them.

I have never really liked the feel of having a pistol magazine protrude out of the bottom of the gun unless it is because the gun grip is too small for me.  I’ve seen a few of my friends do this on their Glocks, namely the Glock 26 because it is such a small gun.   I did put an extension on a Sig 239 which is the  only gun I currently own that has this.   The first gun that I owned was a Colt 1991A1 and it only came with one pistol magazine.   It was a Colt magazine which i thought would be the best gun magazine to have, but that turned out to not be true.   After having a few problems with the slide stop not catching, I found out the magazine tab was bending and causing the issue.

I believe it was at a gun show that I picked up 2 Wilson Combat magazines and my Colt 1991A1 ran flawlessly with ball ammo.  The gun magazines really ran well with hollow point ammunition but I found the gun to be too picky with hollow point ammo that I pretty much gave up on worrying about it.   If you look at the velocity that a 45acp is flying at, I don’t think you’ll have massive over penetration issues compared to 9mm ball.   Wilson combat magazines have varying base pads and from my experience this is mostly a concern for competition shooters.   If the magazine drops free I don’t need to worry about gripping it and pulling it out for a fast reload.

Today I put in several orders for various concealed carry shirts from 5.11 tactical and Blackhawk Warrior wear.   I’m still not happy about most of the tactical apparel companies product lines because so many of them are still not making concealed carry friendly clothing.   A few of them have CCW style shirts that are OK, but only Woolrich Elite really has the shirt thing nailed down right.   Most of the concealed carry style pants that Woolrich had have been discontinued and the better versions made by Eotac are no longer in existence either.    I am waiting for the new Woolrich Chino pants which look very white color friendly.  I hope they made the pockets right because the wallet ID pockets on some of the earlier pants styles were pretty bad and I’m still getting mixed product variations from them.

I can but do not carry a Sig 239 in .357 Sig but I can fit them in most of the Eotac and Woolrich Elite pants that I own.   There are CCW pants made by a company CCW break away that seem to be interesting for guys that have to carry that way, but the new Woolrich Chino pants look like a better idea.   Hopefully they do not look too tactical with the pockets but I will know in a few weeks when they come in.   My newest summer carry gun is my Colt 1991A1 which is thin and not very heavy.  I have been carrying my spare Wilson combat magazines in a pocket now because I have the spare mags on a belt to cause more ride ups from the shirts when I bend over.   Double stack magazines are pretty thick and if you you are carrying them  on a belt, they will protrude.  I do not recommend carrying them IWB because too much IWB stuff can start to hurt after awhile and it does limit your movement or risk causing injury.

There’s a  famous old saying in the world and it applies to all of those accessories and gun parts that you are putting on your guns.   The saying if you’ve never heard it from your grandma goes something like this, “you get what you pay for”.     Long  before I got into the business of selling guns parts and accessories, I remember ordering stock parts and accessory holders that I broke while installing them improperly and then blamed it on the manufacturer.   Then I realized I better pay attention to how I am putting this on and to not force things into place.   The next thing I realized is that expensive version I saw on mounting optics on an AK worked much better and actually held zero while the other part that cost $20 didn’t hold minute of man at 50yds.

Although I do not have combat experience, I have a friends that have served in Iraq and have actually been there and done that.   They claim that they have seen guys take 9 rounds of 9mm ball ammo to take to the ground while it only took 2 or 3 shots from a 45acp to drop them.   Even the military has finally after decades of complaining, agree that 9mm ball ammo sucks and there is a new 9mm ammo that is ballistically superior to the previous one.   Well, for those that have the option to bring their own sidearms to Iraq, they are all carrying M4 Carbines and 1911 style handguns.   If they need lots of handgun ammo, they prefer to use a rifle, if they are clearing rooms they like using handguns.   Don’t take it from me, take it from the guys that are on the front lines and they all swear by the Wilson Combat magazines that are stronger than the standard magazine called the ETM, or Wilson Combat Elite Magazine.