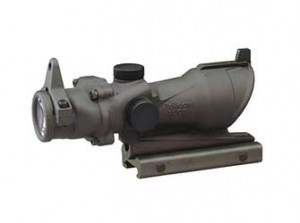 Rifle scopes  and gun optics have gotten easier to use in some regards, but the diversity of the reticles from various manufacturers is something that is starting to give me a headache.   Things were much simpler when it was about a thin crosshair a duplex, European reticle with a pole, illuminated reticle, dot or Eotech gun sight.   Its far more complicated now, but somebody finally realized that not all rifles are designed for the same thing.   When ACOGS started getting a lot of notice and showing up on a firing range I was in awe, but then I realized that the eye relief on them was a limiting factor in close range fighting and you really might want to keep those iron sights on the gun just incase.

I really don’t like deviating from thin crosshairs on a rifle scope because I’ve already seen one too many time that many reticles can obscure your target and what is the point of not being able to see an enemies head pop out behind a tree at 200yds  because your red dot is blocking the entire target.   If you get a CQB optic you may be limiting your rifle scopes ability to see further out and now you’ve got a problem with medium to longer range targets.   The TA01NSN will always be my favorite Trijicon ACOG just because you can quickly transition from glass to iron sights with very little movement.  Mechanical devices like the Eotech magnifier are nice but that is one more thing that can break or come loose on your gun when a simpler approach might be a better option.