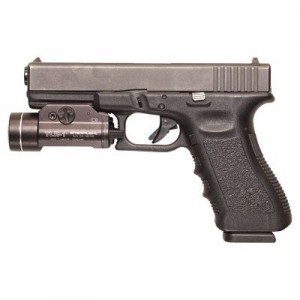 That is a question I’ve been wondering about and speaking to several Law Enforcement about it because they tend to do a little more hard use of weapon mounted lights and, from what I’m told, there are rules amongst them to not have more than 2 people using flashlights when doing an entry.   It’s a guy thing to want to accessorize the heck out of your AR15, but unless you might be using your Carbine in an outdoor situation, you absolutely should consider the fact that there is such a thing as too many lumens.   I’ve been very happy with about a 6yr history of using a Streamlight Polytac on one of my LWRC M6A1 Carbines which only had 130 lumens and it suited me well.   Now that LED technology has improved so much there aren’t very many flashlights below 200 lumens unless they have a high and low power setting.  Personally, I’d like to see something like the TLR1 series of flashlights have some type of high and low power setting on them.

What kind of options are there for very simple and lightweight carbine lights?  In my opinion it really comes down to the Streamlight TLR-1s which is a 300 lumen flashlight with strobe, the Streamlight TLR1 flashlights that is 630 High Lumens is the TLR1-HL,  and the Streamlight TLR2 which like the TLR1 is 300 lumens, but is a laser light combo.   For some reason we see a pattern of people using the TLR-HL light more on handguns than the TLR-1S.  There is about 1HR and 25 minute run time difference between the two, but since your average Patrolman is more likely to have a sidearm on them and be outdoors the TLR-HL seems to be a better option,  that could also apply to anyone that is CCWing and might be outdoors.  I would find the 630 lumen output to be an overkill for indoor use.  There is some good information on the Panteao Production Make Ready with Pat Rogers : Intro to the shoot house DVD where Pat, does some very good flashlight demonstrations in outdoor environments so check that out. 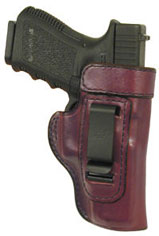 Aside from Fobus holsters, I have a large selection of Don Hume holsters from IWB holsters to the don hum JIT or (just in time) holsters.    One of the major factors in owning so many of them is the fact I’m not breaking the bank and they get the job done.    There are plenty of times I have a change of scenery and usually go to a small .380 pistol when where a suit and tie, or I switch to a medium frame semi-auto like a Glock 30.  The Don Hume H715 leather holster works well for an inside the waistband for the Glock 30 and I’ve owned them for close to 10yrs and they are still performing well.   One of the biggest problems we find with these holsters is they are not always available and certain firearm holsters can be unavailable for months due to the know fact that Don Hume Leather makes great CCW holsters.

Like many products it’s really about personal preference and one holster style may not be good for all firearms.   Every firearm can have a different balance to it and it will really come out when using clip on holsters.   I normally shy away from gun holsters that don’t have metal clips but Don Hume Holsters are one of the exceptions.   I  have had holster clips fail  on me  in numerous ways from flat out breaking, to clips being poorly designed and popping off a belt if  you move your body certain ways.   If you are looking for a paddle holsters, we usually recommend people start off with Fobus holsters, but if you are looking for a leather holster, Don Hume makes a great starting point.