I have several product lines that I have brought in for myself just because I knew I would probable end up buying several items from it for my own personal use.   One of those product lines is the Fobus  one and I can’t say it was because I was a huge fan of the entire product line, it’s just that they make an  extremely practical holster for a very low price.  I’ve been testing out a Safariland 6378 paddle holster and after a long break in, i do like it but there were some issues originally.  I have to say that as far as securing to my belt, I don’t find the Safariland holster to be more secure even though it’s a little more difficult for me to get off.  It may sound like a contradiction, but I had some issues with the gun pulling the holster off my belt when i was 90% sure the gun was secure.   It hasn’t happened since the holster was broken in, but when the gun was tight, it did happen.

The things people have told me they don’t like about the Fobus paddle holsters is they aren’t that strong, well, for most holsters, if you pull on certain parts of them, yeah, they can break and Fobus holsters aren’t exactly built like a tank.   I do think that they Fobus holsters that are the paddle design are very good for IDPA, winter carry, or even for your first 2 day training course.   Paddle holsters always seem to be more comfortable than IWB , but they aren’t always as secure.   Some of these holsters can be had with a belt loop design, but I’m not a huge fan of those.  If you know people are complaining about the lack of retention or adjustable tension, check out the Fobus E2 holsters, the bad thing about those is they aren’t making them for too many guns. 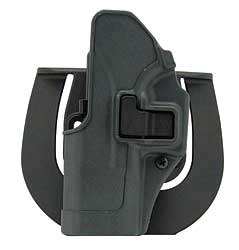 I have people walk in our tactical store all the time asking for some odd ball revolver holsters ect.  I understand people being sentimental about carrying a gun that you had since 1973, but if you have a gun that has been out of production for 30+ years, don’t except to many holster companies to be making a holster for it.   We direct people to a local custom kydex company because it’s too much work for us to call around to find a holster that once it comes in, it’s not what they wanted.   Some leather holsters can cost up to $150 or maybe more depending on what it is you want, but that’s really a royal pain to deal with.   We still get Police Chiefs that want to always try something new or in all honesty, you wonder if there are kick backs or something because they ended up with a Beretta PX4 instead of a Glock, M&P or Sig Sauer.

The next headache we deal with is the amount of research we need to do to get a holster for concealment that takes all of the tactical lights that are Police Officers are using on the streets.   The Blackhawk Serpa holsters we have been selling are very popular but there are not a lot of options if you want a Level 3 or a TLR flashlight.  So many people are putting lights on firearms, and that was not common at all a few years ago.  It’s always good to have a light on your gun because identify a threat is probable the most important thing you can do and given the statistics for when crime happens (low light) you don’t want to be without one.  You might want to think about a Glock.

New this fall we will be bringing on the Aimpoint and Fobus product lines into our 1500 sqft tactical store along with several items from Tru-Spec and Warwick Mills.   We have dealt with several distributors over the last 9yrs and it’s gotten to the point that instead of waiting for stock to arrive, and have to deal with fighting over inventory from other dealers, it was time to start stocking the stuff directly.   There are always changes and improvements to product lines and not getting stuck with a dud product or making sure you have the newest version of something is very important.  Just this year alone we saw some major improvements to our holster and tazer product lines and LED Technology for flashlights has improved by about 85%.  Sometimes holster companies don’t have the accessories up to date with the batons, flashlights, magazine pouches ect that people want.

There have been situations where we have asked customers to look into getting a customer kydex holster becaues there needs were beyond what many manufacturers could make.   Many of our Law Enforcement sometimes have an issue with a holster breaking and just need a quick fix for a range day and that is often where Fobus Holsters come in.   I have a Fobus holster for every Glock firearm, Sig Sauer 228, 229 and Sig 220 that I own.   There are some retention holsters that I may look into picking up since we are a direct dealer now.   The new E2 holster has more flexability when it comes to adjusting your retention which was a common complaint about some of the earlier paddle holsters.

There are some really big differences between each type of paddle holster and not all kydex qualities are the same.   I’m not a big fan of kydex holsters that don’t have metal clips.  I tested out a few styles and most of them failed.   Even with a good gun belt some holsters will eventually wiggle off the guy when you are crouched in certain positions.  I had a Sig 239 pop off a belt when I was bending over and that caused serious concern.  All of the Law Enforcement officers in our store have caused for concern about having guns that don’t have sturdy holsters securing them and for Police, getting  killed by your own gun is something that statistics show does happen.  There is a level 2 holster from Fobus that is a thumb drive design.

The Fobus DB series of holsters is a thumb drive holster that also can be locked and this prevents anyone from just being able to hit the release button and then pull the gun out.  In a recent discussion with Fobus holsters about expanding our product line, we got feedback from corrections officers and prisoner transports.  They informed us that it’s not that uncommon for bad guys to already have handcuff keys or to know how to pick handcuff locks and many of those same people are going to know how to release a Safariland retention holster or a Blackhawk Level 2  holster.   Level 3 is a life saving holster design and one that gives lots of confidence.

In a recent conversation about some of the new pocket guns from Ruger like the LCP and the LC9, many people are calling us up asking us if we have ANY type of holster for their guns.   Gun holsters have just gotten far more complicated in recent  years and even the guys  in the military have to go through some research to buy a holster.   Guns are sold with rails, without rails, some handguns have lasers on them and others want to keep a light on them.    You literally could have 3 or 4 of the almost identical holsters with just slight variations depending on how it is configured.   There are always customer holsters for those with the money to fork out, but not everyone wants to spend $80 on a holster.

One reason to stick with a handgun for CCW that has been out for awhile is getting replacement parts, gun grips, gun holsters and even ammunition might be a good idea.   Blackhawk holsters are probable our biggest selling holster, but they don’t have the versatility as a nylon holster maker like Elite Survival does.   Elite Survival has Made in the USA on their products but might be a little bit above Uncle Mike’s gun holsters and Blackhawk nylon holsters   or even the Blackhawk Omega holsters.   If you are looking for IDPA or a duty holster, the USMC has now adopted the Blackhawk Serpa Holsters as their primary retention holster.   I believe it replaced the M12.

There is a reason that Cops want locking holster, statistics show that many police get shot by their own guns, and I’m sure there are unknown statistics on the number of times Cops have had guns fall out of holsters.   I recently read a review by an LAPD Officer that sheered an entire gun and holster off of his side while the paddle and belt kept part of it in place.   Anything that can happen will happen and probable already did happen.   I remember when Youtube first got popular there were several people bashing Fobus holsters on how easy it was to rip the guns off of people by tearing the holster.   Truth is, it can happen, but it doesn’t happen that often.   When it comes to CCW, most of the time you won’t be dealing with snagging firearms unless you go to retrieve them and they get caught on a shirt or a jacket.

Level I holsters are for, in my humble opinion, all about speed.    A nice IWB holster for concealed carry should keep the trigger protected and be as comfortable and easy to retrieve as the operator desires.  When it comes to level II Serpa holsters, I think this is a smart thing to consider for anyone in an open carry situation.   Yes the bad guy may know how to release  Blackhawk holsters, but your average bad guy probable doesn’t know how to clear a malfunction or do speed loads either.   If you are that concerned about the gun being taken from you, then don’t open carry.   I believe that the Serpa holster is the best way to carry a secondary firearm also.   The Blackhawk Level III holster is best left for law enforcement and people that are in high risk situations.