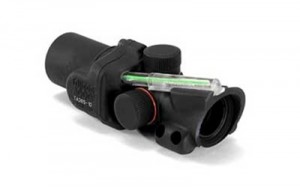 Many believe that illuminated reticles means engaging targets in low light, not always but sometimes.   In recent years there have been some pretty exotic optics and many  of them are pricey.   You’ll be lucky if you can find a combat worth optics for less than $500 although there is a good used market.    I have started out with many of the Eotech gun sights and have been very happy with them.   The only down side to them is the fact that they need to be turned on.  I know several people that have used them  in Iraq and were quite happy with them but I personally do not like the idea of a long deployment and the notion that my if I run out of batteries my optic is basically useless.

Aimpoint makes some good stuff although I really don’t have much use for red dots.   Red Dot optics can obscure a target and I have been more and more a fan of the new and smaller Trijicon ACOGS like the TA26SR.   The green reticle ACOGS are out selling the red  optics by about 4/1 and its becoming more and more common to see green lasers and optics.  The TA26 in my opinion pretty much voids the use of a red dot and has a targeting circle that is on par with the Eotech gun sight.   The clarity is superb and there is no haze that some red dots have.

It seems that everyone and their dog has making nylon gear but there is a very big difference  in the quality.   We’ve sold a ton of clothing over the years and it often amazes me about the customers that have pointed out product defects.   There have been stitching issues with just about every clothing manufacturer and sometimes missing buttons.  Nobody is perfect but there are definitely customer service issues and consistency differences.  5.11 tactical is King of the tactical accessories and clothing, but there are several smaller companies that do things better and have their own niche.

As an internet based business we don’t stock everything in our Pennsylvania location and we ship from multiple locations.   When it comes to stocking gun cases and rifle cases  we have chosen to stock the Elite Survival Systems product line because it just seems more interesting.  Don’t get me wrong the 5.11 gun cases we sell are very nice and to each his own when it comes to choosing a gun bag.   The 5.11 rush messenger bag is a very popular gun bag and it might just be the right size for what you need.