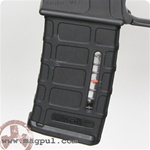 We attended the new Zombie Shoot at the New Holland Rifle and Pistol Club and we had fun watching all of the guys  show  up with the new accessories and gear.   I recognized a few faces from years ago when it first began at a few other gun clubs but gun accessories have changed since then.   One of my new favorite accessories is the Magpul Angled Fore grip.   This was a really good idea and considering the number of people that were using them, they have caught on.   I was never a fan of the protruding fore grips that got in the way when you were firing out a window or laying on the ground.

I have tried some of the folding fore grips but they didn’t hold up too well.  I had a friend take mine off to test out a bi-pod and we ended up finding out that the grip I was using was dangerously close to breaking.   Magpul pmags are still the king when it comes to AR15 gun magazines and I don’t see that changing anytime soon.  There are still debates about the orignal mag puls vs the floor plate for quick mag changes, but I personally don’t have that problem depending on which tactical vest I have been using.  The 30rd window pmags in black are the number 1 sellers from us even though I do see a good many 20rd magazines showing up at these events.

The Northeast recently got hit by an Earthquake and a Hurricane and several family members have come to our Employees and asked them about some of the flashlights that we sold.   We’ve told them  that the Everyready flashlights that they had 30yrs ago are beyond out dated and the technology in the flashlights has advanced tremendously.  LED technology has so improved flashlights that we are now able to use flashlights for hours that are 5-20x brighter then what we had even 10yrs ago.   One thing has not changed though and it is something to consider if you are keeping extra flashlights around the house for non-tactical reasons.

The size of a flashlight is still very important to the average citizen.   The flashlights that use to hold 2 D batteries are about the size that most people expect to use when they think of flashlights and for older people and younger people the size of the flashlight is really a comfort thing.   People want to be able to grasp the whole thing and if they drop it.   The Streamlight Flashlights that we usually recommend are the Poly Stinger or the Streamlight Strion.  Even though most of our tactical operators are using the Streamlight Scorpion or Polytac on their guns or for CCW, those are not what many of your family members are going to want around.