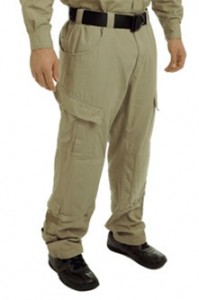 Many of you may think that spending $60 for a pair of pants is too high, but for a lightweight material,  the design is extremely important.   Eotac lightweight pants have a gusseted crotch that will drastically increase your ability to manuever without wearing about ripping your crotch out if you’re running and jumping.    We had a user mention that another manufacturers pants tore in the crotch when he went from prone to standing up on a firing line.    I guess we’ve all torn pants at some point in life, but tactical pants are not meant to be worn like Levi’s jeans.

There are a operator type pants on the market now.   I’ve seen more than a few that were knock offs of the ACU Army Combat Uniform or Paratrooper pants.    Some of them are selling for $20-$100.    That is a pretty big price variances.    I got to try on a few from a distributor that was selling them for $20 and they were worth about $5 after they went through the wash machine.  People don’t really want to spend a lot of money on tactical clothing with this economy, but just like all of the junk AR15, SKS, AK accessories, there are some pretty big differences in clothing durability.   The 2nd thing is the fit and mobility.    True operators are not going to want to feel a crotch ride up on in their pants when they sit down in a car and are carrying 60lbs of weapons and gear.   We had a number of agencies and customers change over to the new Eotac Style 201 Operator Pants and one of the customers stated that in the last 6 months this is the only lightweight cotton ripstop pant that he owned that did not tear at the crotch.   All of the previous pants he wore tore at the same spot.